The Effects of Meaningless Praise on Children

The Effects of Meaningless Praise on Children

By Dr. Dustine Rey published in the April issue of Talega Life 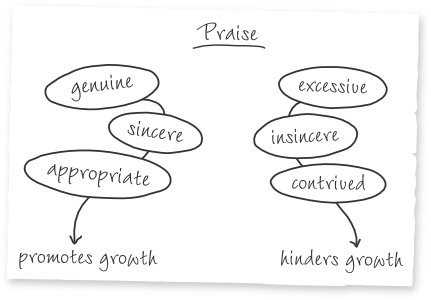 According to a survey conducted by Columbia University, eighty-five percent of American parents believe that it is important to tell their kids that they are smart and praise them for grades, performance, and intelligence. Many well-intended parents and teachers praise children for everything from reading a book, playing jump rope, and drawing pictures. To what extent does praise limit or harm a child’s performance?

The last twenty years of research on motivation and academic success has indicated that common and frequent praise is a trap that undermines intrinsic motivation and a child’s willingness to try new things. Praise has immediate short-term results but deleterious long term consequences.

Giving kids the label of “smart” does not prevent them from underperforming. It might actually be causing it. Stanford Professor Carol Dweck studied the effect of praise on elementary school students, her team found that a simple statement “You must be smart at this” or “You must have worked really hard” predicted the level of challenging puzzles students would chose to do. Ninety percent of those recognized for “effort” chose harder tasks, while the “smarter” labeled children stuck with the easier tasks.

When we praise children for their intelligence, we tell them to look smart and to not risk making mistakes. However, recognizing effort gives a child a variable that they can control. It is so important to provide children with the tools that allow them to see themselves as in control of their success.

Duplicated experiments conducted by various researchers have found the effect of praise on performance held true for children of every gender and socioeconomic class. The brightest girls especially collapsed following failure or not appearing “smart.” Even preschoolers are subject to the inverse power of praise. For example, preschoolers who were praised for trying a new beverage were less likely to try another new beverage than kids who weren’t. More surprising, preschoolers praised for painting with blue, stopped painting with blue when teachers did not praise them for their painting.

Children saturated with rewards, including verbal rewards, become less engaged in the very things for which they are rewarded. The consequence of too much praise is a lack of internal drive and reflection. One hundred and fifty research articles on overpraised kids strongly suggests that image maintenance becomes their primary concern, taking less academic risks, resorting to cheating, and collapsing under stress or failure.

Fortunately, not all praise is equal; the effects of the type of praise can vary significantly. Be sure to read next month’s blog dedicated to meaningful praise. Do you have ideas? Please share!